The fight against pathogens that have become resistant due to a genetic mutation requires completely new active agents. Finding such active agents is the aim of the EU project PneumoNP, in which Fraunhofer ITEM is actively participating. The explicit task is to develop therapeutic compounds that are able to kill resistant strains of the bacterium Klebsiella pneumoniae. Infections with the original Klebsiella pneumoniae strains were easily treatable with several antibiotics, however, the bacterium meanwhile has developed so many resistances that even treatment with last-resort antibiotics fails.

Transportation of the active ingredient to its site of action will be ensured by coupling it to tiny particles called nanocarriers, designed to transport the active ingredient directly to the site of infection. Dextran-based nanoparticles will be used as nanocarriers, as well as liposomes loaded with different novel, antimicrobial peptides (AMP). The focus of the work performed at Fraunhofer ITEM will be on in-vitro studies aimed at enabling early selection of suitable nanocarriers and combined nanosystems.

The effectiveness of the new AMP nanocarrier systems in treating antibiotic-resistant bacteria will be evaluated by microdilution testing. Cytotoxicity testing will be performed in cell-based assays using human lung cell lines. Promising nanosystem candidates will be analyzed by in-vitro genotoxicity testing in compliance with international quality standards. To allow the real-life situation in patients during treatment to be mimicked as closely as possible for testing of the new therapeutic compounds, the scientists will use an in-house developed and patented air/liquid interface exposure system. This system allows human lung cells and even viable lung tissue to be exposed directly at the air/liquid interface and to be examined right after the exposure. In the present project, human lung cells will be treated directly with nebulized AMP nanocarriers, closely mimicking the human treatment situation.

By the end of the PneumoNP project, the aim is to have a novel, inhalable antibiotic available that is able to successfully eliminate multi-resistant Klebsiella pneumoniae. 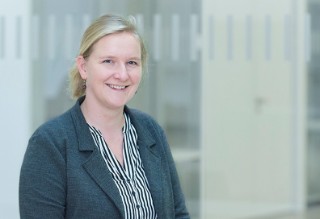 Manager of the Working Group on Infection and Immunology