Approaches for new treatments in the fight against cancer

Dr. Bernhard Polzer is fully concentrated as he looks through the microscope at the slide bearing bone marrow cells from a breast cancer patient. In between the bone marrow cells, he is searching for disseminated tumor cells that he previously labeled with a blue dye. When he finds a blue cell, he suctions it up with a glass capillary and places it on an empty slide.

It is single cells like these that can kill cancer patients: disseminated tumor cells that lie dormant for years in the bone marrow or other organs and one day form metastases that ultimately lead to death. Nine out of ten cancer deaths are not caused by the primary but by secondary tumors.

“We are developing special methods to genetically analyze single disseminated tumor cells and tackle them individually,” explains Bernhard Polzer, deputy director of the Division of Personalized Tumor Therapy at the Fraunhofer Institute for Toxicology and Experimental Medicine ITEM in Regensburg. The 40-member research team aims to use genetic data to shed light on the not yet well-understood process of metastasis formation – and, in this way, to develop approaches for new forms of treatment.

Heading up this research division is Prof. Christoph Klein, who in 2014 received the German Cancer Award in recognition of his work. “In carcinogenesis, cells revert to programs that are important in embryonic development,” explains Klein. “When a degenerated mammary cell detaches and is transported through the blood to the bone marrow, it tries to form a new mammary gland there.” But instead of a mammary gland, only a tumor is formed that destroys the surrounding organ.

Cancer progression and the invisible phase of metastatic colonization.

Christoph Klein sees great potential to avoid metastases in a diagnostic approach that learns to understand the onset of metastasis at the molecular and cell biological level. Important information for such an approach can be obtained by conducting a pathological examination of lymph nodes removed during a tumor operation. The same method has been used for more than a hundred years now to examine lymph nodes to see whether a tumor has already disseminated. Ultra-thin slices of tissue are taken from multiple locations and a pathologist searches them for cancer cells. “Unfortunately, the tissue between the cutting planes is not examined,” Klein criticizes. “So any metastases located there are overlooked.” Together with Fraunhofer IPA and Fraunhofer IIS, Christoph Klein’s team has developed a method that makes it possible to analyze the entire lymph node. Samples are prepared using a tissue grinder, which carefully separates the cells. Afterwards, the sample is treated with a special dye that stains the disseminated tumor cells. Two million lymph node cells are scanned automatically and suspicious objects are then examined under the microscope. “Using our method, we detected tumor cells in half of the examined lymph nodes,” says Bernhard Polzer. “With the conventional method, in contrast, pathologists found cancer cells in just 15 to 20 percent of the samples.” A market-ready version of the new method is currently being developed.

Christoph Klein obtained his medical degree from the Ludwig Maximilians University (LMU) in Munich (Germany) in 1998 and established an independent research group in 2001. After habilitation, he was promoted to Professor of Oncogenomics at the University of Regensburg in 2006.

Since 2010, he has been holding the chair of Experimental Medicine and Therapy Research there and was appointed Division Director of Personalized Tumor Therapy at Fraunhofer ITEM in 2011.

Once Bernhard Polzer has isolated individual disseminated tumor cells under the microscope, he takes the sample to the next room, where the latest generation of DNA sequencers stand at the ready. But even for these modern machines, a single cell contains too little DNA to deliver reliable results, so Polzer has to multiply the cell’s DNA prior to analysis. To do this, he uses a method that Christoph Klein developed back in 1999 – important pioneering work that first made it possible to analyze individual cells and that is now established as the standard method worldwide.

Genetic analysis reveals, for instance, whether the disseminated tumor cells have the same properties as the primary tumor and might therefore respond to the same treatment. Often, however, they do not. The disseminated cells mutate when they reside in a foreign tissue environment for a longer period. “When breast cancer cells reside in bone marrow, they can take on the properties of the hematopoietic cells that surround them,” says Christoph Klein. “The cells evidently adapt to their surroundings.” But the disseminated cells can also activate additional cancer genes in their new environment. Then they become more and more aggressive and dangerous.

If the genetic analysis reveals that the disseminated tumor cells have mutated, fighting them requires different remedies than those used for the primary tumor. Polzer and Klein are currently researching how to find the right drug for each patient. Their starting point is a technology that already works for large numbers of cells and must now be adapted for single cells. It analyzes 450 cancer-specific mutations for which drugs are already available on the market or in clinical trials.

Bernhard Polzer is clearly focused on the goal: “We want to isolate the disseminated tumor cells in lymph nodes or bone marrow and examine them for these 450 mutations. Then we could target them with the right drug to prevent them from metastasizing.” To this end, the researchers in Regensburg are working with a number of companies that want to transfer this innovative diagnostic approach to everyday clinical routine.

The team also uses conventional methods to determine which drug is effective against a patient’s metastases. To do this, they propagate the tumor cells in a nutrient medium, where they grow into spherical structures known as organoids. These cells can then be used in the lab to test the various potential active agents. It is hoped that this will enable them, in collaboration with the clinic in Regensburg, to one day help many patients.

Klein and his group focus on how solitary cancer cells derived from solid cancers disseminate from the primary tumor, survive at ectopic sites and interact with the local tumor microenvironment.

Their findings have resulted in several novel concepts of metastatic disease progression such as the “parallel progression model” and the “framework model” (cancer dormancy).

Klein and his group continue to build on these models with the goal of improving systemic therapy prediction, monitoring systemic cancer evolution and developing rational, stage-specific therapies to maximize the benefits for cancer patients.

What turns cells into killers?

When Bernhard Polzer suctions up a blue-stained disseminated tumor cell, he often asks himself: Would this cell have had the potential to kill the patient? Or would it have remained dormant and not done any harm? After all, not all disseminated cells form metastases. Christoph Klein calculated that, in a breast cancer patient with no visible metastases, there may be 10,000 to 20,000 disseminated cancer cells in the bone marrow. Only a few of those have the potential to metastasize. But which properties enable them to do this? Do they trick the immune system? Do they activate aggressive cancer genes? What turns them into killer cells?

To find an answer, Christoph Klein, in collaboration with several clinics, launched a study involving 200 breast cancer patients. His team examines these patients’ primary tumors, disseminated tumor cells and metastases. In each cell they examine, they analyze all the genes that cell activates. These data are then correlated with the patients’ clinical course – a vast amount of data to which the research group’s bioinformatics team gives structure. “We search the tumor cells for markers that are associated with a poor prognosis for the patient,” explains Christoph Klein. The full results of the study will be available by the end of the year – and will hopefully provide clues as to what turns cells into killers.

Text by Christine Broll, published in the Fraunhofer magazine01/2020.

”Nine out of ten cancer deaths are not caused by the primary tumor but by metastasis.”

Your contacts for Personalized Tumor Therapy 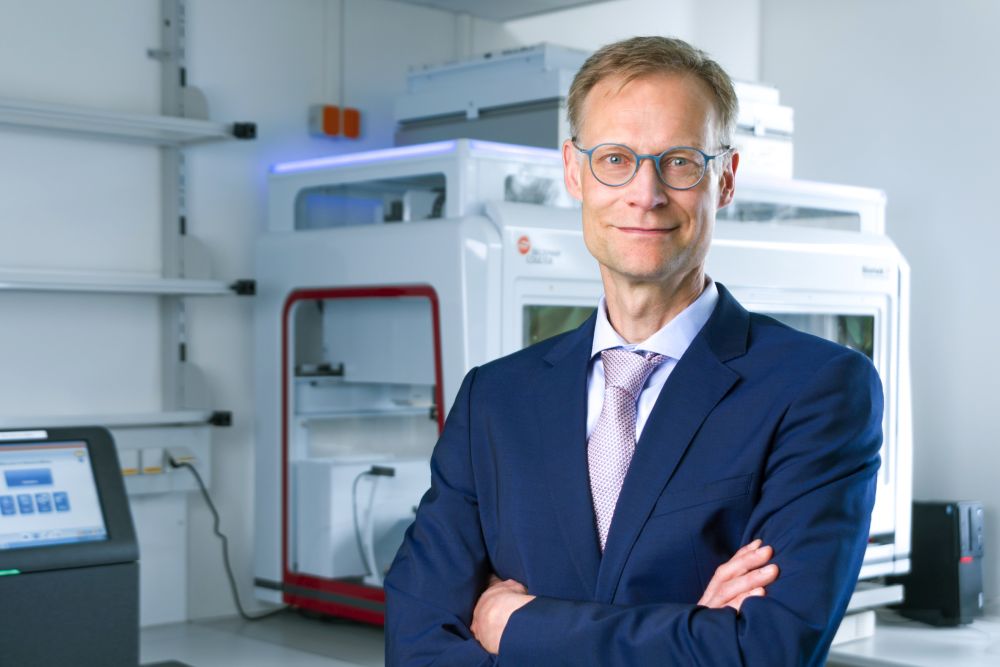 Manager of the Working Group on Cellular and Molecular Diagnostics