Acute health impairment, such as bone fracture, is mostly immediately understood and skillfully treated today. The situation is similar for many monogenic illnesses, such as sickle-cell anemia, in which a single gene, hemoglobin, is mutated. However, most cancers are multi-causal and sporadic in that they evolve somatic, i.e. non-inherited, genetic aberrations through numerous environmental factors, ranging from carcinogens and radiation to infections and diet. They can also result from erroneous cell division during physiological tissue renewal, e.g. in intestine and blood. Cancer cells are generated even in healthy individuals, but kept in check by the immune system or programmed cell death (apoptosis). In such complex, multi-level settings, modeling can help to better understand disease mechanisms and structure and combine local and global information, and finally integrate molecular diagnostic and clinical data for the most effective therapy with the least side effects for each individual patient.

Learn more about our services in personalized tumor therapy.

Multi-level mathematical modeling provides unique opportunities to coherently integrate complementary data from different scientific disciplines, such as molecular cell biology, cell and tissue microscopy, functional testing and clinical diagnostics, thereby enabling a better and more comprehensive understanding of physiological and patho-physiological processes. By simulating treatment effects it can efficiently support development and application of innovative therapies. This is particularly challenging in the context of single cell-based cancer research with immediate therapeutic intent and is currently pursued by only few groups worldwide.

Disease modeling is best supported by experimental data. Currently, profound analysis of newly generated and archived data from local sources, databases and literature is being performed mostly on data from the Chair of Experimental Medicine and Therapy Research of the University of Regensburg (headed by Prof. Klein), national and international collaboration partners, and the Fraunhofer ITEM team itself. Applied methods range from data mining, machine learning, and statistical testing to data comparison (meta-analysis), pathway identification and visualization. Modeling techniques include spatial process simulation, population dynamics, and deterministic and stochastic modeling of gene expression and genetic evolution in cancer cells.

Melanoma evolution and spread through the lymph system

Detection of Her2 amplification in single esophageal cancer cells: Multiple copies (amplification) of the Her2 gene in esophageal cancer are indicative of poor survival, if and only if found in disseminated cancer cells. Patients harboring this genetic aberration may, however, benefit from its early detection, since targeted Her2-specific therapies can then be readily applied. We developed a statistical evaluation method for the reliable detection of Her2 amplifications in single cells.

Genetic alterations driving lymph node colonization in melanoma: Together with researchers from the Chair of Experimental Medicine and Therapy Research of the University of Regensburg we identified specific genomic alterations that accompany lymph node colonization by disseminated cancer cells in melanoma. This finding impacts early assessment of disease progression and selection of targeted therapies to prevent metastasis in each individual patient.

Sphere formation based on disseminated cancer cells: A promising experimental approach pursued by the Fraunhofer ITEM team is the production of cell spheres from single disseminated cancer cells. This multiplication of the original single cell facilitates molecular characterization and testing of individual therapy response. In a collaborative project, we are analyzing gene expression data to enhance the cultivation process and ensure highly identical expression characteristics before and after cell expansion.

Interleukin-6 (IL6) signaling in the mammary gland: IL6 is a pro-inflammatory cytokine that is known to be a major factor in breast cancer development. It can act through direct (classical) and more indirect (trans) signaling. We are currently evaluating gene expression for different experimental conditions and cell types to further elucidate breast cancer development. 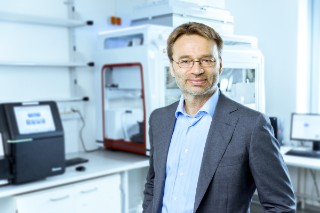