Each year, about one billion people worldwide are affected by influenza epidemics, over five million of these with serious outcomes. Anti-influenza vaccines are available; however, they are not always effective because, as a survival strategy, the viruses keep modifying their surface structures, thereby evading previously effective vaccines. In the research consortium Fraunhofer iCAIR German and Australian scientists are now breaking new paths in the development of anti-infective therapies: they develop antiviral drugs and test their efficacy in precision-cut lung slices (PCLS) – vital human lung slices which allow the early phases of viral lung infection to be modeled in the laboratory.

In the project Fraunhofer iCAIRTM, the Fraunhofer International Consortium for Anti-Infective Research, scientists of the Fraunhofer Institute for Toxicology and Experimental Medicine ITEM, Australia's Institute for Glycomics (IfG) of Griffith University, Queensland, and the Hannover Medical School have teamed up to explore novel anti-infective therapeutic concepts. They identify therapeutic targets, develop compounds acting on these targets, and evaluate the efficacy of these drug candidates in special test systems such as PCLS – lung slices created from resected human lung tissue. During this year’s International Conference of the American Thoracic Society (ATS) in Dallas, TX (USA), the researchers showed that this test system can also be used for efficacy testing of novel anti-influenza drugs ((link to Olga’s ATS abstract)). They demonstrated that zanamivir, an already approved neuraminidase inhibitor developed by the Australian researchers, has the same antiviral effect in human PCLS infected with influenza virus ex vivo as in the intact human organism. Human PCLS can thus be used for preclinical efficacy testing of novel antiviral drugs in the future. The Fraunhofer scientists are currently testing new active agents developed at IfG in the PCLS model.

The overall aim of the scientists in the project Fraunhofer iCAIRTM is to overcome one of the biggest obstacles to developing new drugs: the gap in the drug development chain that arises between the discovery of new, potentially beneficial substances – often by universities or small companies – and the clinical development up to approval of a new drug, carried out by pharmaceutical companies. Once a drug candidate has been identified, it first has to undergo preclinical testing in relevant and predictive test systems, before it can advance to the stage of clinical testing. Fraunhofer iCAIRTM, with its broad interdisciplinary expertise ranging from basic research to preclinical testing, aims to bridge this gap in the drug development process and to help meet the urgent need for new anti-infective drugs.

The aims, possibilities and services offered by Fraunhofer iCAIRTM will also be presented at the Fraunhofer booth in the German Pavillon at this year’s BIO International Convention, the world's largest biotechnology trade fair, taking place in Philadelphia, PA (USA) from June 3 to 6.

The Fraunhofer booth at this year's Bio International Convention from June 3-6, 2019 will focus on respiratory infections and in particular the iCAIR project.

Fraunhofer ITEM research teams are facing up to the challenges in infection research. Dr. Sabine Wronski, manager of the Working Group on Infection and Immunology, talks about this in an interview. 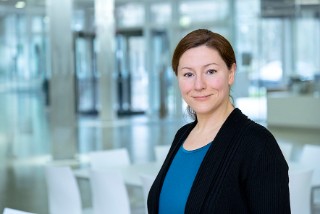